So here’s a secret about me: I’m a complete nerd when it comes to the London Underground. Well…it’s not a total secret, especially to those I’ve made play the London Underground board game I own (and for those friends who’ve had that experience, I thank you for your indulgence.)  From the moment I stepped on my first Circle Line train at Embankment station in 2002, I’ve been hooked on the Tube’s history – from its inception in 1863 to the first electrical underground lines in 1890 (the first in the world) to its use during World War II to its modern day expansions. I can’t read enough, see enough or travel on it enough. Every time I so much as see the famous roundel logo or that Johnston font (which date back to 1916), I get a little thrill of excitement.

January 9, 2013 marked the 150th anniversary of the premiere London Underground railway journey on the original Metropolitan line. To acknowledge this huge transport milestone, The Telegraph provided readers with an interesting fact for every year of service. Here are just a few of my favourite:

For many, the single most recognizable thing about London’s transport network is its map. Created by engineer draughtsman Harry Beck in the early ’30s, it was originally thought too different from the city above and from the current map to be of any use for travellers. Luckily for future merchandisers everywhere, the public loved Beck’s interpretation and it became the system’s official map in 1933. 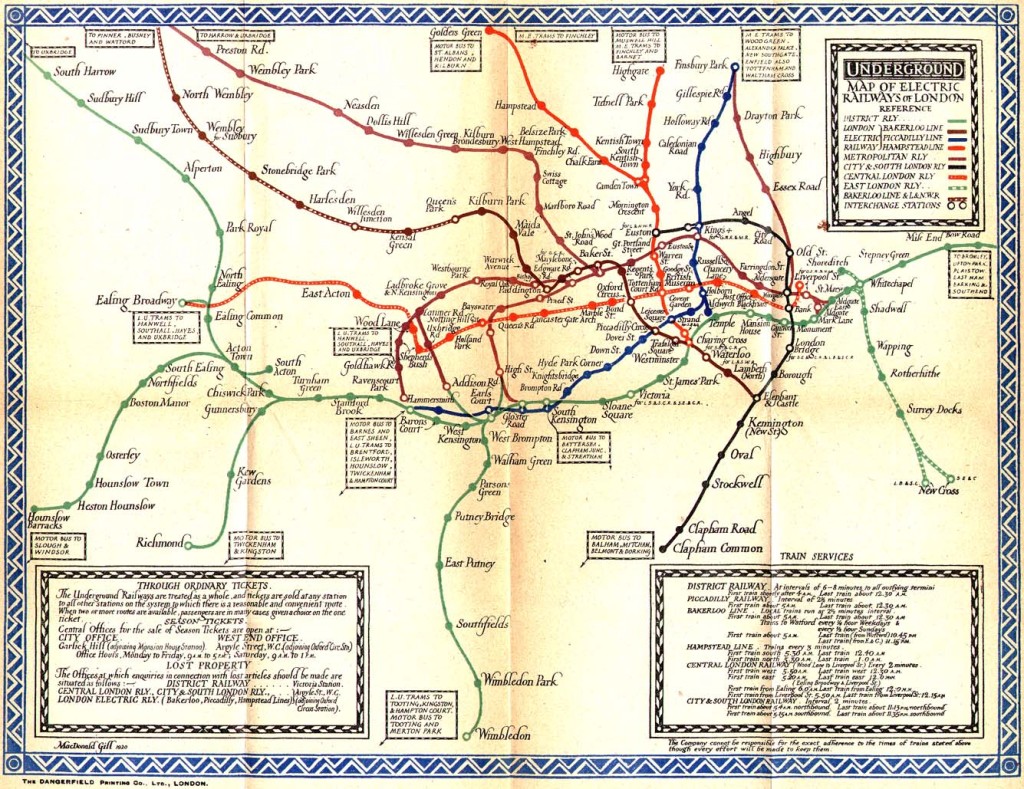 The London Underground map in 1921. Note how it actually resembles the city above.

The London Underground map, 1933. Via right angles and standard distances (and by including the river too), Beck made transit simpler for commuters, while ignoring the layout of the city above.

Over the years, London’s underground transport network has experienced a frankly ridiculous number of changes including station closures, station relocations, the building of new stations and the creation of brand new railway lines but despite all of that hubbub, Beck’s map continues to be officially used and expanded on. 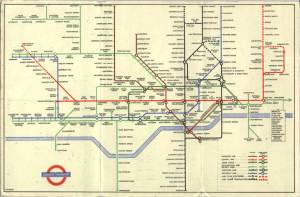 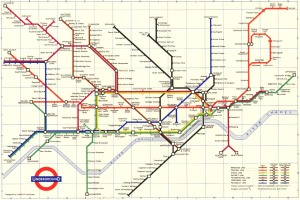 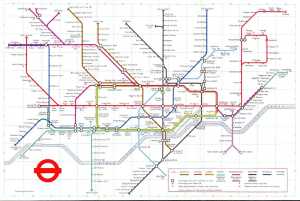 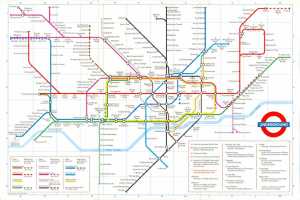 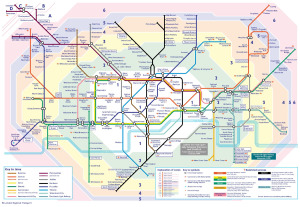 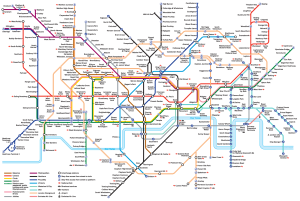 2015 will see a new version of the notable map released as two existing east London rail services from Liverpool Street are taken over by Transport for London (aka TfL, the government body in charge of the Tube) and added to the existing Overground network (see changes illustrated in the image below.)

The Crossrail construction project made headlines earlier this year when workers uncovered a mass burial site at the station, known variously as Bedlam or Bethlehem and the New Churchyard, where over 20,000 Londoners are though to have been laid to rest between 1569 to at least 1738. Archaeologists will spend the next four weeks excavating approximately 3000 bodies from beside Liverpool Street Station, all thought to be victims of the Great Plague in 1665. Considering how vast the Underground network has become, it’s perhaps more surprising that discoveries like this aren’t popping up on a daily basis.

What the London Underground map will look like when the new Overground stations are added later in 2015. Click to see the changes in GIF form.

See what I mean? Nerd. And with interesting stories like that, can you really blame me?

So one day during my third week as a Londoner, I decided to get off my arse and head out to discover some of the Underground’s famous “ghost” stations – stops on the system that have long been closed but whose station-buildings or edifices remain. On my way to the first location on my list, I made a quick trip on the Northern line to stop at King William Street Station…or the spot where it used to stand. 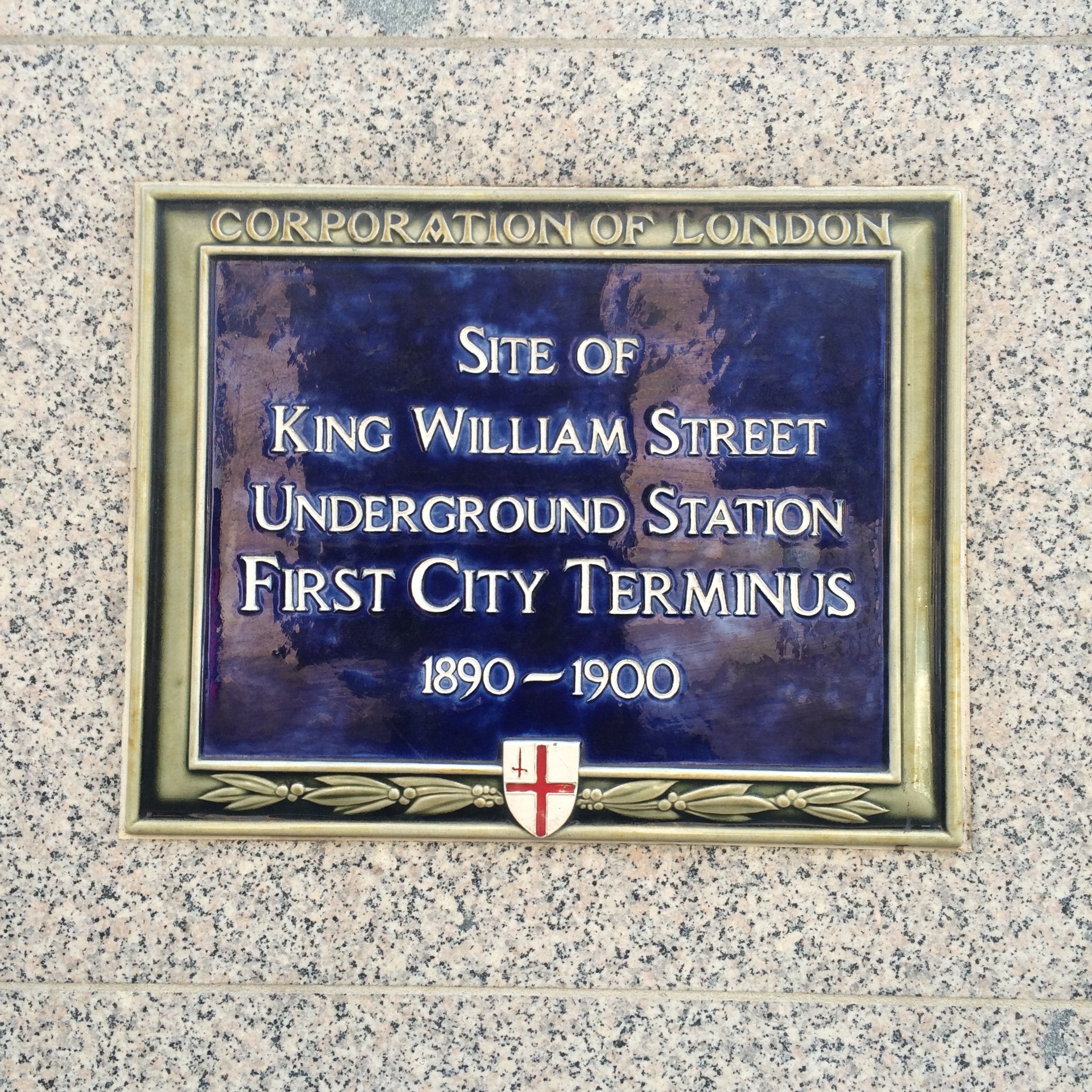 King William Street Station was the original northern end of the City & South London Railway, the first underground railway line in the city and part of the still-running, deep-level Northern line. It opened in 1890 but closed just a decade later at the turn of the century, replaced by Bank Station just to the north. Though the underground platforms were used as air-raid shelters during World War II, the street-level building was demolished in the mid-’30s and the above plaque is all that remains to mark the historic location. Situated just to the south of Monument Station, on the side of the Regis House office building, the station’s only remaining access is through the basement of the business tower.

Next it was back to Bank Station for a trip on the District line west to Temple Station. From there it was just a quick hike up the hill to the most used disused station on the Underground, Aldwych Station. 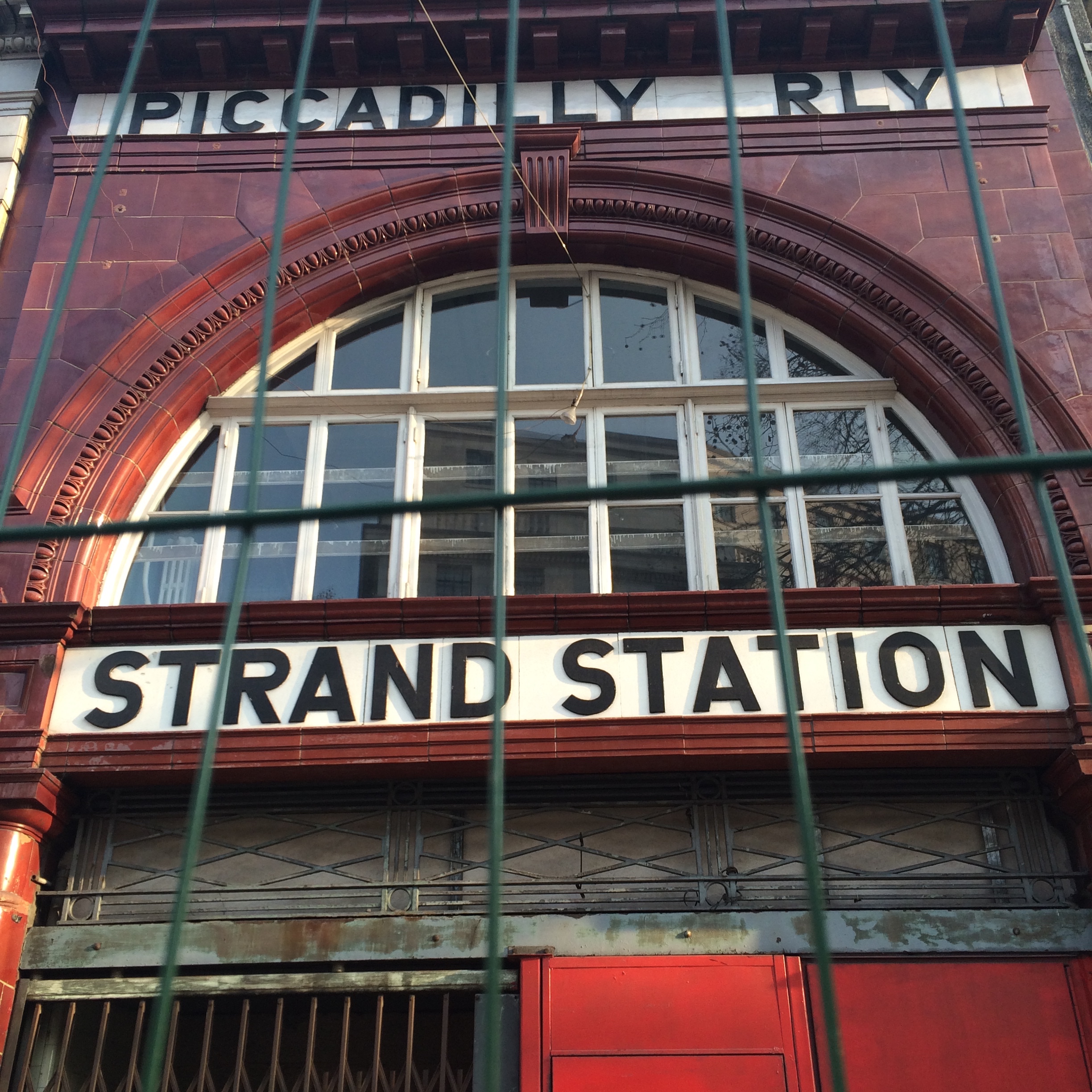 Originally known as The Strand (until May 1915), the station at the corner of Strand and Surrey Street opened its doors in 1907 as part of the Piccadilly Line branch from Holborn Station. In fact, it was the ONLY station on that branch due to a possibly ill-advised merger of two separate railway plans. Over the years, it was suggested numerous times by various planners to extended that branch of the line south to Waterloo but no proposed extensions were ever realized. During the First World War, its disused second platform was used to house paintings from the National Gallery and artifacts from the British Museum.

For one reason or another, the station suffered from low use throughout its existence and was consistently under threat of closure, temporarily closing first in 1940, reopening in 1946 and then finally closing again (after operating only at peak times for years) in 1994, when it was decided $3 million renovations were cost prohibitive given the lack of passengers. During its temporary closure during World War II, the platforms and other parts of the station underground were converted for use as one of the Tube’s 79 public air-raid shelters. 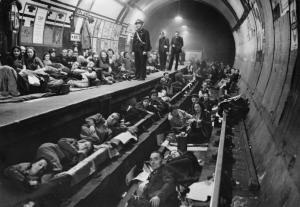 The scene at Aldwych tube station in 1940. (From the collections of the Imperial War Museums)

Since its closure in 1994, various television and cinematic productions have used the tracks and platforms for filming including BBC’s Sherlock (as a fictional closed station in the episode “The Empty Hearse”) and Atonement (subbing in for Balham Tube Station.) Once a year, the London Transport Museum opens the Grade II listed station building for guided tours – a must see for transit and history nerds. Unfortunately 2015 tours have already come and gone (ending in mid-February), but keep an eye out for 2016 dates later this year.

So from bustling Strand to leafy and subdued Green Park/Constitution Hill next, via the picturesque St. James route of the Number 9 Aldwych bus. Hopping off the double-decker Routemaster, I crossed the street and headed east, back toward the posh Park Lane Hotel. A few short blocks later and I found myself at Down Street and Piccadilly, where the appropriately named Down Street Station used to welcome Underground passengers. 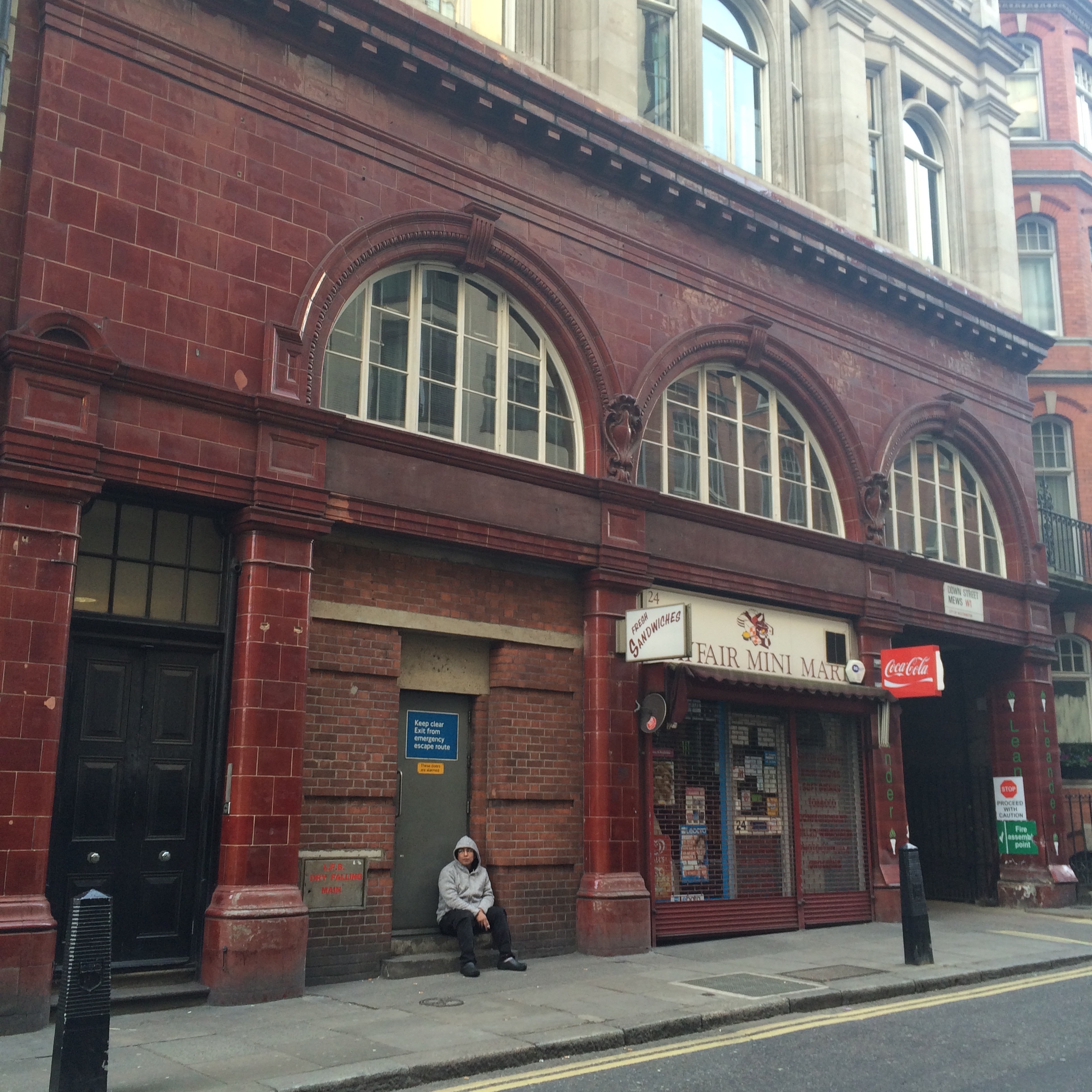 A hint for those, like me, on the look out for London’s famous ghost stations. Keep your eyes peeled for the distinctive ox-blood red tiled façades (with those eye-catching half-circle windows on the second level) designed by Edwardian architect Leslie Green. More often than not the stations in question will become easier to spot with that in mind! Down Street, a perfect example of said tiled-façade, opened in 1907 as part of the Piccadilly line but closed in 1932 after low-usage and the close proximity of surrounding stations Hyde Park Corner and Dover Street (now Green Park) made it redundant. Winston Churchill and his war cabinet made it their initial home and bunker at the outset of World War II, before relocating to the now-famous rooms beneath Whitehall. The only present day access to the station’s platforms and tunnels is via a pedestrian thruway in Hyde Park Corner station and as such, is only used in emergencies (as they were in July 2005.)

Deciding to hoof it to the next location on my list, I made my way west toward Knightsbridge and South Kensington. It turns out staying above ground was a bit of alright given I spied some of those Leslie Green tiles I mention earlier where I least expected to them: as part of The Wellesley hotel. 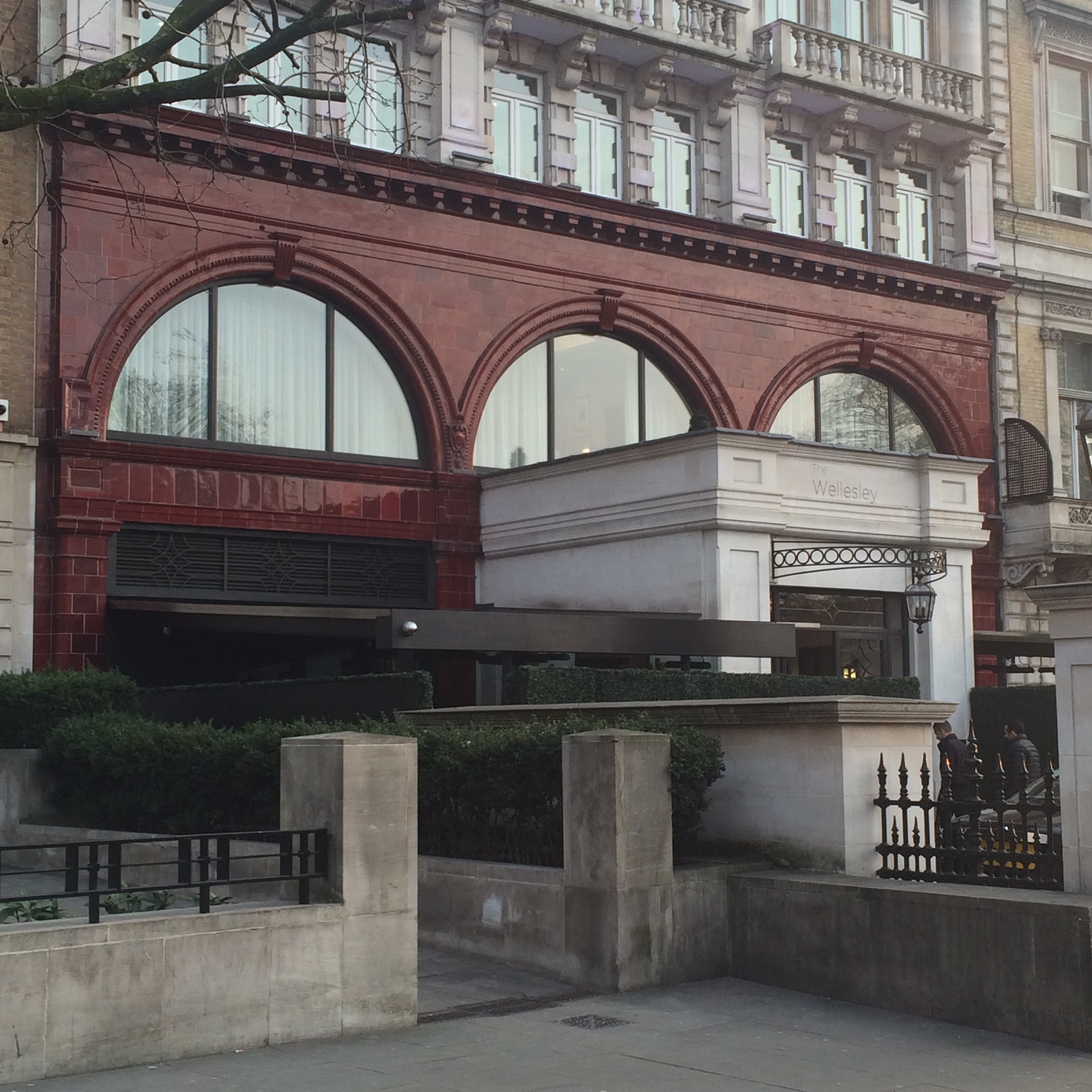 The first entrance to Hyde Park Corner Station, now a part of The Wellesley hotel.

Somewhat confused and thoroughly surprised, I pulled out a traveller’s best friend – my trusty iPhone – to do a little research. It turns out that the current Hyde Park Corner Station isn’t precisely the same station that first opened in 1906. The above building, on the south side of the road junction, was the main station entrance until 1932, when the station’s lifts were closed and escalators installed along with a new, underground ticket hall. These changes were also major contributing factors to the closing of nearby Down Street station. The old station and lifts (which continue to provide ventilation to the tube line today) were converted into a restaurant until 2010, when the property was sold. It then re-opened in 2012 as part of the new Wellesley hotel.

After sorting out that Underground puzzle, I continued on in search of Brompton Road Station. Not surprisingly I found it, right where it should be, off the Brompton Road and adjacent to the famous Brompton Oratory. 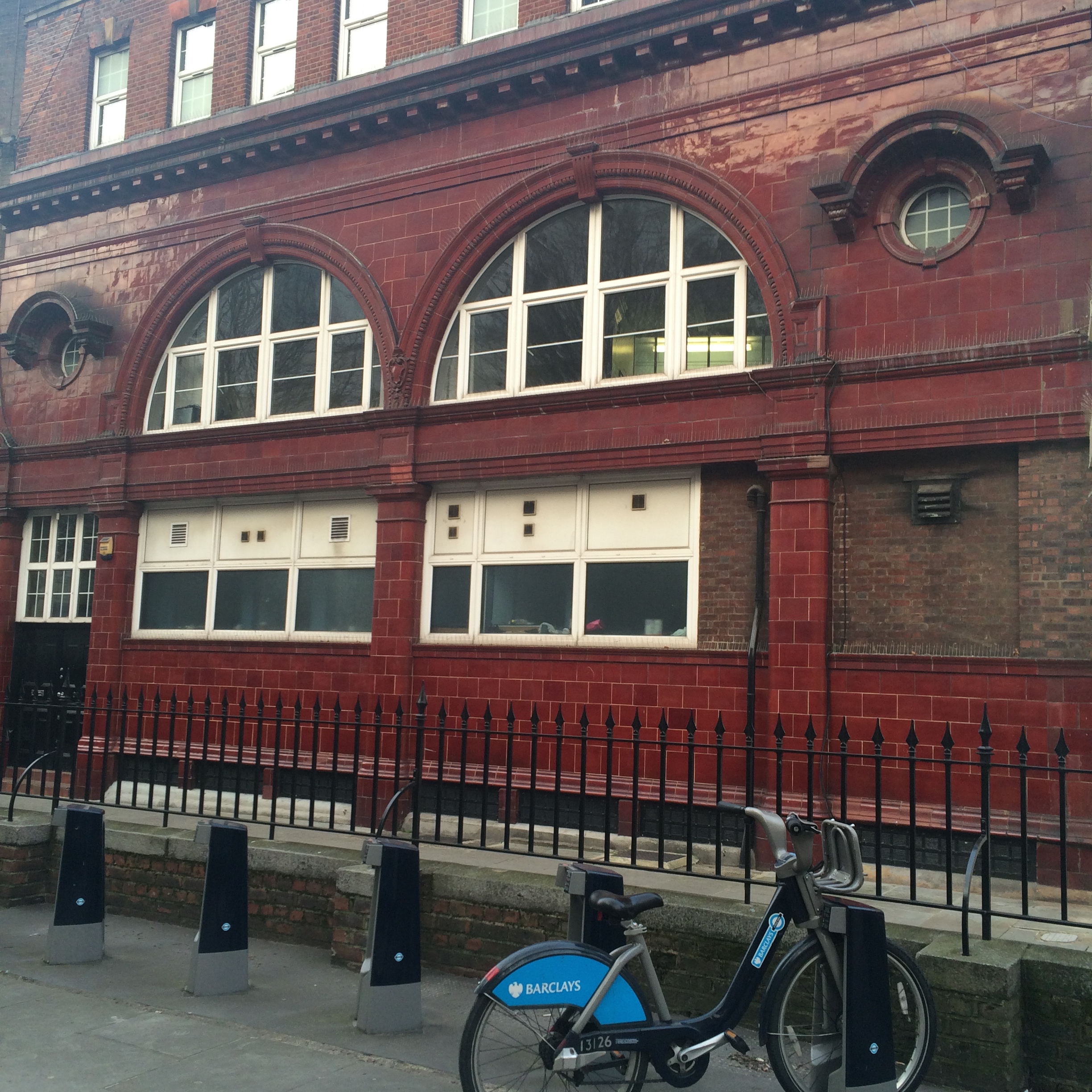 Located on the Piccadilly Line between Knightsbridge and South Kensington Stations, Brompton Road first opened its doors in 1906. From the get-go the station was little used – with trains by-passing it as early as 1909 (a common practice affecting most of the stations discussed here) – and it was eventually closed in 1934 after nearby Knightsbridge expanded and opened an entrance closer to the Brompton Road. Like many other deep-level stations, it was converted for use during World War II and the space acted as command central for the 26th Anti-Aircraft Brigade. The original entrance on the main road was pulled down in 1972, but the side entrance on Cottage Place remains – though it was sold to developers in 2014, so who knows how much longer that will be the case.

I still had a few stations left to visit but, with night descending on London, decided to postpone the rest of my tour for another, brighter day.

So tune in soon for Part Two! Then it’s on to a look at London and wartime, because I’m a nerd about that too.

To see a full list of the London Underground’s disused stations (and unopened stations), hit up this useful list on Wikipedia.